A warm April day welcomed our annual visitors from Kidwelly. Traditionally Kidwelly provide stiff opposition and this year was no exception with their team containing multiple Welsh internationals and Gold cup winners. Wigan and his rink of Cameron, Club Chairman Fred and JR started slowly against Gold Cup Legend David Kingdon, 12 shots to 5 down after 12 ends but picking up a 6 on the next end changed the game and they eased to a 23 to 15 victory. Rink 2 saw Chris skipping Dai, Club Steward Joe and Ben. An evenly matched game until the 12 end , the Tenby rink accelerated away picking up counts of 2,4,4,4  in the next 4 ends to take the lead and also ease to a 24 shots to 18 win. Simon and his rink of Ben, TP and Peter continued where they left off against Pendine last week. Comfortably ahead by 15 shots to 6 after ten ends, they continued in a similar vein in the second half to win by 29 shots to 14. Ashley ably supported by Viv, David and Neil started slowly, losing by 13 shots to 2 after 7 ends. After a brief comeback to get within one, Kidwelly then counter attacked and ran out comfortable winners by 25 shots to 17. Jon Webb with Beano, Johnno and Ken had a ding dong battle against Matthew James' Kidwelly rink. The lead changed hand on numerous occasions,

but the Tenby quartet looked comfortable on the 19th end leading by 6, However Kidwelly picked up 7 shots in the remaining ends to win by a single shot.  Out on rink 6, Gerald together with John, Kev and Steve also struggled early on, trailing by 11 shots to 3 after 8 ends. Solid bowling by all four allowed them to even up the match by the 16th end, however a final flourish by the Kidwelly rink led to 21 shots to 16 win for the visitors. A tough game against quality opposition which will set up both the Tenby and Five Arches teams for the forthcoming season. Finally many congratulations to Jon Hubbard who has been selected to represent Wales in the forthcoming Para Bowls Home internationals in Glasgow. Jon has been a stalwart member of Tenby Bowling Club for many years  and has finally achieved the recognition he thoroughly deserves.

On a very cold and windy day, the Five Arches welcomed Pendine Bowling Club to Tenby for a very early pre-season friendly. Perhaps it was a bit too early in the season but both teams endured and played 15 ends in a friendly but competitive manner. Simon and his rink of Mike, TP and Peter effortlessly won on rink one. After a fairly even start, the Five Arches rink picked up 6 shots on the 7th end and another count of 5 on the 11th end to run out comfortable winners by 20 shots to 9. A welcome return to Gerald in Five Arches colours who skipped John, Ben and Steve to another win, never behind throughout the match, they won by 18 shots to 6. New recruit Huw " Beano" Nicholas had a interesting start to his Five Arches career. 13 shots to nil down after 5 ends, however ably assisted by Kev, Johnno and Cameron they fought back well  to be only 7 behind when the game finished after 15 ends. Captain Ashley and his rink of Viv, David and Dai were always in control on rink 4 , a run of scoring on 8 consecutive ends allowed them to run out easy winners by 27 shots to 11. A good start, hopefully putting the Five Arches in good stead for the forthcoming season. 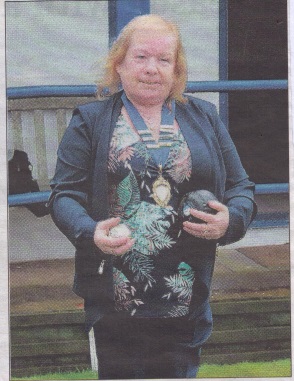 The Molson Coors sponsored Tenby Sharks team created history last Saturday at the Sutton Street Stadia when they secured an historic eigth consecutive Pembrokeshire League Division One title, eclipsing the teams of the 1960s and the '90s.
Rink one:  To say that the Keiran Peregrine rink got off to a flyer against the experienced Richard O'Leary rink would be an understatement. A count of three, followed by three counts of five shots took them into an early 18 lead. The best start to a game that I have seen was in the 1990s when_the rink of Viv John, Chris Thomas, myself and Jimmy Oliver took three counts of six shots over the first three ends against Dick Evans, of Milford Haven. The fact that Jimmy and Dick never saw eye to eye was especially pleasing to our Jim and I did see a rare smile from the great man. At 10 ends, the Haverfordwest rink did make some inroads into the lead and trailed by 20-9. That lead was further reduced over 15 ends to 22-14. The Tenby rink, with Luke Rees, Jon Webb and county singles champion John Roberts, then rallied over the next six ends by outscoring their opponents 7-3 to secure a final winning score of 29-17.

Rink two: Paul Diment's rink keeps getting stronger, with the addition of a new international in Joe Richards. However, the duo, who were joined by international Ryan Thomas and county player Cameron White, got off to an awful start by dropping a double and a four over the first two ends. Tenby scored two singles before the Haverfordwest rink, skipped by indoor international Alan Whitehouse, took a count of three to extend the lead at five ends to 9-2. The question on everyone's lips: "Was Diment suffering from a Gold Cup hangover?". The answer came on the following end, when the maestro took a count of seven to level things up. A single the following end saw the rink take the lead 10-9. Then Diment played a great two-foot trail shot to make a count of six, only for Whitehouse to play an equally impressive shot to make shot. The Haverfordwest rink took a two to retake the lead 12-10. That's when the talented Tenby rink took the game by the scruff of the neck and restricted the Haverfordwest rink to nil over the next 12 ends - scoring 24 shots themselves! The scorecard looks so impressive that it has been laminated by Cameron White, but for you avid readers: 3, 1, 2, 5, 1, 2, 1, 3, 2, 1 and 1 Final score 34-12.

Rink three: With Craig Guymer moving house, but still finding time to watch 85 per cent of the game, Luke Guymer took over skipping duties to maintain his 100 percent start to the season. Chris Court played third and after a troublesome start to his Tenby career when he couldn't buy a win, the very likeable and talented former international has certainly found his feet and is proving to be a very popular member of the Tenby team. Mike Jackson continues to excel at lead and I would be happy to go on record that Rafa is the stand-out lead for the season. Huw Nicholas, or commonly known as Beano, is a very dependable player and now has three county titles to his name to go with his county rinks title. Dropping two counts of two shots and one of four over the first four ends, they trailed by 8-3 against the rink skipped by former Milford Haven player, Gareth Barrett. Scoring a two, four and a three over the next five ends levelled things up 12-12. A dropped single and pair saw them fall behind 15-12, but then in a similar way to the Diment rink, they took the bull by the horns and scored 2, 7, 2, 3, 2, 5, 1 and 4 in between a two and a single for Haverfordwest. Final, score 38-18.

Rink four: One of the top performing rinks for Tenby, the rink of Aaron Lloyd, Gerald Hewitt, Peter Day and Andrew Muskett had a late withdrawal through injury of vice-captain Gerald Hewitt, but an able replacement was found in the form of Special Olympic bound Shaun Peregrine, non biological brother of international Ryan Thomas. Wigan's rink got off to their usual high start by taking a 6-3 lead after eight ends. Then the wheels truly fell off Longshanks's chariot when he dropped 3, 2, 4, 3, 4 to fall behind to county team manager, PDS Jenkins. Things didn't get much better for the dependable rink as they only scored on three ends out of 13 from their 6-3 position to finally lose by 27-13.
In conclusion, another very comprehensive performance by the defending and newly crowned county champions, Tenby. Shaun Peregrine and Steve Sheldon pick up their first championship medals and well done to them. Diment has extended his Pembrokeshire record to 23 league titles. Tenby Sharks have dominated again in Pembrokeshire, but the task now is to win against RTB Ebbw Vale tomorrow, something which they have every chance of doing, but a very big challenge is before them. Hopefully, I will be able to report of something special in the club's 92nd year and another star, symbolising another Carruthers win, will be above the Tenby town crest.

The Five Arches travelled to Fishguard hoping to get back to winning ways after two defeats. Fishguard are fighting in a relegation battle at the bottom of the league so a tough game was on the cards. Captain Ben and his rink of Kev, Tony and Turbo were first up on rink 2. A closely fought game all the way with the Five Arches boys all playing well however Fishguard skip Tony was playing superbly denying the Five Arches quartet any chance to pull away. At 10 ends the score was 10 shots to 7 for the Arches and after another close fought 11 ends , the game ended as 16 shots apiece draw. On rink 3 , Ashley and his rink of Bill, David and Ken were up against Fishguard stalwart Davo Hughes. After a bright start, 7 shots to 0 up after 3 ends, the Arches rink only had a slender of lead of 4 shots at the halfway stage. However a big surge in the second half saw them run out comfortable winners by 26 shots to 13. Rink 4, saw Ben and his usual table topping rink of John, Jonno and Steve involved in a dramatic game. They were trailing throughout the game, 9 shots to 1 after 5 ends, 16 shots to 11 after 10 and 23 shots to 16 after 15. However after picking up their third five of the afternoon on the 18th end, they drew level and finally edged the game by 28 shots to 24. Neil and his rink of Harold, Mike and Jimmy battled out on rink 5, trailing by 7 shots at tea, they fought back to be within 4 on the 18th end but a late flourish by the Fishguard foursome allowed them to increase their lead to 27 shots to 16 . A great victory away from home, the Five Arches now have 99 points with one game to go. Next up , Pembrokeshire league champions for the 8th successive year Tenby, on Saturday 29th August.