The Tenby team continued their league programme last Saturday against Whitland.  Currently unbeaten, Tenby went into the game firm favourites, but the Whitland Club were able to field an almost full strength team for the first time this season. Whitland started the fastest, leaded by 7 shots at the five end mark and extending it to 11 shots at the half way stage.  Whitland continued to maintain their fine start to the game and extended their lead to 16 shots coming into the last quarter of the game.  An unbelievable finish by the Sharks, over turned the lead, and went into the last end of the game, leading by 12 shots.  A dropped count of 5 resulted in a final score of 89-82 to Tenby.

Paul Diment, on rink 1, played with Cameron White, Fred Broomhead and Joe Richards.  Diment’s indifferent start to the season continued and the rink were soundly beaten by Glyndwr Thomas who won 26-17.  Two dropped counts of five shots and a four made the most damage although at one stage the rink was 5-19 down.  A strong finish brought them back to 17-21 at the twenty end mark and the rink could be forgiven for dropping a count of five shots on the last end, as they were ‘going’ for the rink win to try and secure another two points. Things were not much better on rink 2, with Ryan Thomas, Chris Court, Dai Rees and Mike Jackson coming up against Steve Reese’s foursome.   With Diment 5-19 down at twelve ends, Ryan was one shot worse at 5-20 at the same stage.  The rink did make inroads into the deficit and finished 16-25 at the close.

Kieran Peregrine, John Roberts, Liam Price and Ben Cloake were all on fine form against Colin Wynn.  This rink kept Tenby in the game and led 22-6 at twelve ends.  Colin’s rink won 3 consecutive ends, resulting in 9 shots to reduce the Tenby rink’s lead to a mere 7 shots.  With this run, it did seem the Tenby challenge would be over.  Over, the rink responded brilliantly by winning all the remaining ends and scoring 13 shots in the process.  Final score 35-15. Muskett, Day and Lloyd – unbeaten this year - were joined by Peter Hooper against Dan Jenner.  The rink fell behind at ten ends by 2 shots and went behind on 18 ends by three shots 13-16.  Then two singles plus shot of the day by Muskett made a 6 shot count to record a winning scoreline 21-16.

In conclusion, what a great finish by Tenby.  This game was very similar to the game played against Haverfordwest earlier in the year.  However, it could be argued that like Haverfordwest, the better team lost.  If it was not for a very strong finish over the last three or four ends, the day would have belonged to Whitland and congratulations to them for such a performance. Saturday, Tenby face the mighty Prestiegne and go into the game as firm underdogs.  Prior to this they face Haverfordwest  (Tuesday) and Saundersfoot (Thursday) and players will be moved into positions ready for the challenge of Prestiegne.

The Tenby Team returned to league action this weekend in defence of their League Title which has been resident in the Tenby club for the past eight years.   The Tenby team, currently top of the division, faced a side at the bottom – Pembroke Dock.  However, I do believe that this is a temporary measure as Pembroke Dock have got too many players of quality to remain in such a position and only the week before defeated Whitland away in the Carruthers Shield.  Therefore a stern test was expected. Rink 1:  In the absence of Kieran Peregrine, John Roberts skipped the Tenby four.  Luke Rees and Ben Cloake both having excellent games, as did Liam Price, current County Pairs Champion.  They faced the County Senior Vice-President, Richard Hissey’s rink.  An indifferent start saw the rink fall behind at five ends, 3 shots to 6.  That lead was extended by a further single shot at ten ends (7-11) and at twelve ends, the Dock rink led by five shots (8-13).  The Tenby four then upped a gear and won the next six ends and only failed to score on the nineteenth end.  Over that period, they outscored the shell shocked Dock four by 17 shots to 2.  Final score, 25-15.

Rink 2:  Craig Guymer, Mike Jackson, David Rees and Luke Guymer played the experienced Brian Dowling.  Identically – in relation to rink 1 – the Tenby four were behind 8-13.  Then a run of 3, 6, 1, 2, and 2 saw them finish strongly to retain their 100% record 25-19. Rink 3:  Also unbeaten this year, Muskett, Day and Aaron Lloyd were joined by club chairman Fred Broomhead, who like David Rees has played every league game this year.  They too were behind for the first half of the game until a strong finish, which included a count of five shots on the eighteenth end, secured victory 20-14.  Special mention has to go to the Pembroke Dock Skip, Mathew John, who in the words of Day and Muskett was absolutely superb. Rink 4:  Paul Diment came in as a late replacement and teamed up with his usual rink after a few changes in the original team.   The rink of Cameron White, Joe Richards and Ryan Thomas have lost their last 3 games and there has been talk that Diment had seen better days and that his style of play was not suited to the demands of the modern bowler.  However, a stay of execution was granted as the rink played very well, to a man, against a strong Pembroke Dock rink skipped by Pembroke Dock Captain, Richard Jones.  Leading 8-2 at the five end mark, the Pembroke Dock rink came back to two shots until a count of four shots followed by a 2, 2 and 3 extended the lead to 19-7.  A very poor finish, with dropped counts of 4 and 3 on the nineteenth and twentieth end saw an eventual score of 27-19.

In summary, a great win, especially in light that the Tenby team were down at ‘tea’ by 7 shots.  Once again a strong finish but the same ‘urgency’ is required at the start as well as the end in the coming months if success is to continue in both the league and Carruthers Shield. Tenby do not have any game next weekend but return to action with a home fixture against Whitland and then Haverfordwest  the following Tuesday. 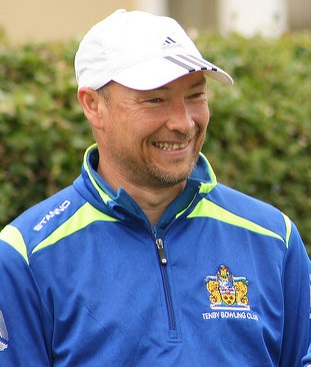 Many congratulations to John Roberts for once again being selected for the Welsh Team. Full team here.

The Giltar Hotel sponsored Tenby Club played near neighbours, Saundersfoot, in a knock out match to qualify for the later rounds of the Welsh Carruthers Shield (Club Competition). Tenby defeated Saundersfoot in the last sixteen last year on their way to the final in Llandrindod Wells and were well aware that they would face a very stern challenge from the Villagers. Andrew Muskett, Peter Day, Liam Price and Aaron Lloyd played against Steve Dick and once again got off to a good start, leading 9-2 after 7 ends.   The lead was maintained on the 14th end (15-8).  A count of fours shots taken on the next end extended their lead to 11 shots, but then the rink uncharacteristically dropped a county of four shots on the very next end.  However, some amends were made up when they took back 3 shots on the next [end].  The Saundersfoot rink won the remaining four ends, 3-1, but this did not effect the winning result and final score of 23-15 to the unbeaten Muskett.

Rink 2 saw the undefeated Carruthers Rink of Craig and Luke Guymer in addition to the formidable front end combination of Mike Jackson and Chris Court.  They played Stephen Poole’s four.  Early exchanges kept matters on a even ceil  until the Tenby four took a county of five shots on the eight end.  The Saundersfoot rink then appeared to capitulate by losing three consecutive ends of a 4, 2, 3.  The lead at the 14 end stage being 21-9.  However, credit the Saundersfoot rink who then responded with winning three consecutive ends of their own of 1, 2 and 1.  It was again the Tenby rink who finished stronger scoring 6 shots to 1 over the last 4 ends.  Final score, 27-14. Rink 3:  Kieran Peregrine, John Roberts, Jon Webb and Luke Rees played against Saundersfoot’s Berwyn Dennis.  A tight game was always expected between these two players.  In a similar manner to the game on rink 2, there was not anything between the two sides, with Tenby behind 7-8 at the ten end mark.  A dropped count of 5 shots gave Saundersfoot some momentum but with Kieran in great form, the rink won all but one of the five ends, scoring 7 shots to 1.  Final score 15-17 to Saundersfoot’s rink who were indebted to the excellent Alan Brain who was outstanding playing at second.

Rink 4:   Paul Diment, Ryan Thomas, Joe Richards and Cameron White were reunited for the first time this season and came up against a Saundersfoot rink skipped by Mervyn Dennis, who played extremely well.  The game was extremely close with Tenby rink dropping no more than 2 shots to restrict the Saundersfoot team to 18 shots at the close.  Similarly, Saundersfoot’s defence was good despite them dropping a count of 3 shots on the second and last ends.  Final score 15-18 to Saundersfoot. In conclusion a very good performance from the Tenby players who in typical fashion finished very strong over the last 3 ends.  A fact which secured victory with Saundersfoot only behind by a few shots going into the final stretch. Tenby play Presteigne of Mid Wales in the first round proper.  A side of immense talent and experience – this will be a very very hard match.  A lot of the Presteigne players compete in the Tenby Gold Cup and are very familiar with our green.  Of course, they also boast multiple Welsh Title Holders and of course, the greatest Welsh player ever in Robert Weale, a former World Champion and Commonwealth Games Singles Gold Medallist. Thank you to the ladies for the Tea and to Fred for preparing the green.

The Molson Coors sponsored Tenby BC played their first Carruthers game of the Pembrokeshire group stages in the 2016 campaign. Fishguard and Goodwick were the visitors to Sutton Street, hoping to pull off a giant-killing act. Rink one: Luke Rees, Joe Richards, Luke and Craig Guymer were five-nil down ifter two ends, but once the initial ring rust was discarded, they surged into an impressive lead, eventually winning by 13 shots. Rink two: Cameron White, Jon Webb, Chris Court and Keiron Peregrine raced into an impressive 16-nil lead after six ends. They eased off a bit in the second half, but still ran out 11-shot winners. Rink three: Ben Cloake, Liam Price, Mike Jackson and John Roberts were up against a Fishguard triple which can be sometimes difficult. Close early on, John and his men eased away in the final stages to a comfortable victory. Rink four: Aaron Lloyd, Dai Spencer, Ashley Hooper and Peter Day were never troubled during their encounter and ended up 14 shots the better after 21 ends. In conclusion, Tenby cruised to an expected win, which sets up a mouth-watering clash against local rivals Saundersfoot to decide who will progress to the knockout stages of the competition.