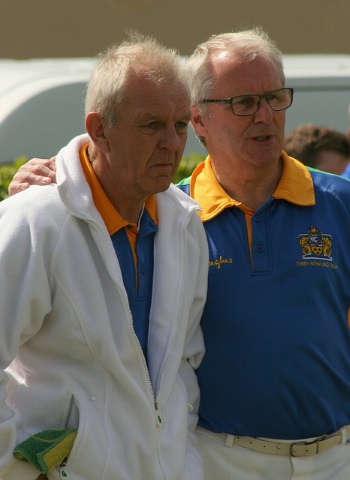 Games don’t get any harder in the Pembrokeshire league, than a game against the mighty Tenby team. So on a sunny Sunday afternoon we looked forward to a tough match. On rink 1 , in front of the crowd, Mike, Peter, James and Neil were soon under the hammer against Paul’s Tenby rink. They trailed by 21 shots to 5 after 11 ends and despite a better performance in the second half of the game, they finally succumbed by 33 shots to 10. Ashley with Dai, Turbo and Ken all played well to compete with and just edge out Ryan’s rink. Holding a slender a 1 shot advantage at tea, the game remained tight throughout with the five Arches quartet eventually winning by 22 shots to 15. Ben, John , Jonno and Steve were involved in another tight game, drawing 9 all at tea , the game was decided by Andrew’s  Tenby rink picking 14 shots in a run of five ends and drawing away to win by 26 shots to 15. Finally on rink 4, The Five Arches welcomed the silky skills of Simon Evans, returning to play in the Pembrokeshire league. However it was a baptism of fire for Simon and his rink of Roger, Tony and Ben. They trailed by 16 shots to 5 at tea and JR’s rink consolidated in the second half to win by 29 shots to 10.

Saturday saw the Five Arches team visit Pendine on a  sunny Spring afternoon. Pendine is always a tough place to get a result but hopes were high after winning our first two matches. Captain Ben and his unchanged rink once again bowled well, leading 12 shots to 8 after 10 ends , they then eased away in the second half to earn a 25 shots to 17 victory. Ashley with Ken, Tom and Bill had a game of contrasting fortunes, losing by 13 shots to 4 after 10 ends, they fought back into the match, only to just miss out by 18 shots to 17.A slow start by Bens’ rink of John, Jonno and Steve saw them 15 shots to 3 down after ten ends, although bowling better in the second half, they couldn’t close the gap and finally lost by 25 shots to 12. Unfortunately due to player unavailability, Neil had to play in a triple with Mike and Peter, after a promising start 4 shots to 0 after two ends, it all fell apart, losing the next 10 ends to be 19 shots to 4 down and eventually losing by 32 shots to 9.75. A disappointing result for the Five Arches, but a well-deserved one for the Pendine team.

A busy week for the TP Hughes and Welsh Gift Shop sponsored Five Arches team with three matches in Division 1 of the Pembrokeshire league. First up, on a cool Wednesday evening, the return fixture against the Castle team from Haverfordwest. Captain Ben and his rink of Roger, Tony and Five Arches debutant, James, played superbly , scoring numerous big counts including a 7 on the 9th end, as they strolled to a 38 shots to 14 victory. Rink 2 also saw a count of 7 for the Five arches on the 9th end, however for  Neil and his rink of Tom, Harold and Peter, this proved to be the highpoint. From a comfortable 21 shots to 9 lead on the 12th end , this lead was whittled away by a determined Castle quartet who eventually won the game by 25 shots to 22. Ben, John, Jonno and Steve had a close game on rink three, playing against a triple , which is always tough , they did just enough to win by 20 shots to 13.5. Ashley and his rink of Dai, Kev and Ken had a very similar match on rink 4, again against a triple they edged to a 22 shots to 13.5 victory.

The Giltar Hotel sponsored Tenby Carruthers side, entertained Pembroke Dock on a hot Sunday May afternoon. Tenby and Pembroke Dock were both undefeated leading to this game – both having easily dispatched the challenges of both Whitland and Fishguard & Goodwick.  Therefore the victors would secure their place in the knock out stages of the Welsh Club Championship – the Carruthers Shield which Tenby won in 2009 and reached the semi finals on further 3 occasions (2010, 2012 and 2013). Rink 1 saw the undefeated four Paul of Ryan Thomas, Joseph Richards and Cameron White face the challenge of the experienced Richard Jones, Ken Edwards, Dave Finn (all current county senior players) and club chairman, Alan Yea.  Diment’s four, always good starters had a deficit to face, falling behind 0-3 after two ends.  A run of six consecutive winning ends saw a healthy lead of 11-3 and the next end, with one bowl to play, Richard Jones made shot, when six shots down.  This did not deter the Tenby four and another sequence of winning ends saw a fine win against arguably the ‘Docks strongest rink by 25-12.

Rink 2:  Craig Guymer faced Pembrokeshire’ Junior Vice President, Richard Hissey together with Huw Nicholas, David Spencer and Chris Court.  Behind at five ends (5-6), but winning 6 out of the next 8 ends saw a lead develop 15-11.  However, Richard’s four came back with a three on the very next end to only trail by a single shot.  Sharing counts of three’s and two’s meant that Tenby led by one shot (18-17) at 18 ends.  A single shot and then a three seemed to have secured the win, but on the very last end, Pembroke Dock failed narrowly to make a draw by picking up four shots to lose by one (21-20). Rink 3: The Woody Woodpecker rink of Keiran Peregrine, John Roberts, Jon Webb and Mike Jackson got off to a flier against Brian Dowling and Pembroke Dock captain Mathew John – leading 8-3 after six ends and 13-5 after nine [ends].  A scoring run on ends 12 to 16 for Pembroke Dock (2, 1, 2 and 4) saw the visitors take the lead (14-18).  However, the Woodpecker rink are made of stern stuff (liquid mostly) and they won all but one of the last six ends to close out a one shot win (20-19).

Rink 4: Finally, the winning sequence of top rink came to an end and they will have to settle to share the 1954 record as described last week.  Andrew’s four of the movie star or movie gatecrasher, Gerald Hewitt, the agriculturist, Aaron Lloyd, the movie extra, Peter Day and longshanks himself still performed to a very high level against Pembroke Dock’s Brian Cale.  Aaron seemed to have some difficulty filling in the score cards between seven and ten and therefore I will have to start my report on end 11.  I will bring a pencil and a rubber for him next game so I can work out what went on! A four and a two on ends 11 and 12 followed by a three on end 14 saw a lead of 15-6.  A share of shots of the remaining ends saw them close out the game 21-12.  Another professional display and upon the arrival of Williamson (being delayed due to work permit issues at present) this rink does look formidable. Team Manager, Dave Spencer, was naturally delighted in qualifying for the later stages of a competition we would love to win again.  The team looks very strong and competition for places is the best I have ever seen.  With the added boost of having Simon Evans returning to the club and the availability of Under 25 international, Luke Rees, II firmly believe that success is very much within the clubs reach. Our thanks to the Giltar Hotel for having sponsored all our Carruthers Shield games this year.  The next will be in a few weeks time against Bargoed who have successfully navigated through their group.

There was a mass exodus from Tenby Bowling Club last Saturday as the Arches ladies and the men's team travelled to Whitland, the ladies to play a league game and the men to play their second fixture in the Carruthers Shield competition. With all rinks occupied, there was an added sense of competitiveness across the green. On rink five. Alison had Helen, Audrey and Lynn supporting her. They seemed unmoved by what was going on around them, reaching the halfway stage 10 shots to five in the lead, and that's how the Arches rink score remained for the next seven ends. During this unproductive period, the Whitland rink, skipped by Cally Jones. added 13 shots without reply. There was no way back for the Arches rink, losing a further three shots on the last end and their battle by 21 shots to 12. On the outside rink, the opposite was happening. The Whitland rink skipped by Viv Kerrison raced to a 14 shots to seven lead at the midway period and all looked lost for the Arches ladies, but the fightback was about to start. It was the 13th end that was to prove unlucky for the Whitland ladies. They conceded four shots, then a further 10 in the remaining eight ends. Captain Carol skipped to rink with Gerry calling the shots at third, supported by Mair and Liz, to complete the fightback to win by 21 shots to 18 and secure two league points. Whitland, however, won the game overall by 39 shots to 33 and picked up four league points. Tenby Arches ladies are sponsored by Tenby House.