With one end to play, it looked as if the Arches ladies would be returning to Tenby from their visit to Pembroke Dock Park with nothing to show for their endeavours, but Alison, along with Lynn, Audrey and Julia, were to change this. The Arches’ second rink, skipped by Carol and supported by Margaret, Meryl and Gerry, had finished their game losing 27 shots to 15 to the Park rink skipped by Margaret Lewis, so they were able to add their support to their colleagues who were about to start their last end one shot down. Lynn and Audrey got woods into the head, only for the Park third to move the jack off centre and get shot with her wood, which ended up in the ditch. Julia, playing her first league game of the season, came to the mat and drew the shot to tie the game. Penny Brickle, the Park skip, failed to change the head with her first wood, but Alison had no such problems, playing a perfect wood to draw in a second shot and take the Arches’ ladies into the lead. It was down now to Penny to recover the situation, but she failed with her last shot. The game was won and Alison had no need to bowl her last wood. Pembroke Dock Park won the game overall by 11 shots, but Tenby Arches Ladies, who are sponsored by Tenby House, secured two league points.

On rink 1 , Ashley, Dai, Tom and Ken battled out a draw against Dan Jenner. Leading by a slim margin at the halfway point, the Five Arches quartet slightly  lost their way in second half and some fine bowling by the Whitland rink enabled them to pick up 2 shots on the final end to tie the game at 16 shots apiece. However it was the remaining three rinks which provided all the excitement. Ben Simmons and his rink of Steve, Jonno and John provided most of the fireworks , with Ben producing some amazing saving bowls and the rest of rink playing superbly, they increased their narrow 2 shot lead at tea to run out comfortable winners by 27 shots to 16.  On the next rink, Simon, Neil, Peter and Kev played against Whitland's former Gold Cup winner Steve Reese and his rink, in a game evenly poised after 11 ends at 10 shots each, Simon and his men went into overdrive in the second half to completely outplay their opponents. They won 9 of the 10 ends, scoring 19 shots to 1 , to complete a fine victory by 29 shots to 11.  Finally Captain Ben and his rink also joined in the fun. Playing against last week's Rossiters Cup winners , Ben and his gang ran away in the first half to be leading by 13 shots to 1 after 8 ends, steady accumulation from there onwards ensured they also won  by a comfortable margin of 23 shots to 8. A fantastic performance against one of the best teams in the league on their home patch, this  must rank as one of the Five Arches' finest wins in the last ten years.

Five Arches rinks, away skips only. 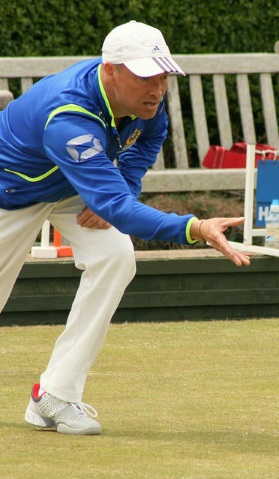 Congratulations to John Roberts for being selected for the Welsh Team for the forthcoming series . Full team can be found here. 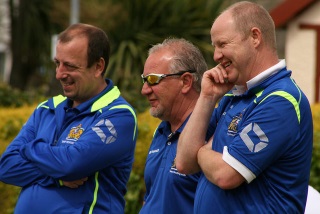 The Tenby Sharks continued their league programme against Haverfordwest Castle.  Top of division one having a 100% start to the season, they were looking to extend their lead against their North County opponents. Rink 1: Tenby saw the return to action of Luke Rees, the Under 25 International, who has been absent due to work commitments.  It was great to see the likeable and talented young man again.  Luke teamed up with Huw Nicholas, Jon Webb and Craig Guymer.  8-3 up after 5 ends, the rink extended their lead to 16-3 after ten ends with no big counts but consistent scoring.  The Castle rink skipped by G. Walters made some inroads into the lead and at fifteen ends were behind by 9-18.  A solid finish saw the home side win by 25-13. Rink 2:  The returning Kieran Peregrine skipped John Roberts, Steve Sheldon and Mike Jackson. Yours truly sometimes wonders how a Rafa Benitez look a like gets on with two die hard Manchester United Supporters like Jon and Red Steve. However judging by the result of this game they seem to get on fine.  Scoring a 1, 2, 3, 4, 5 and 6 in their game – they almost won the ultimate – however the 7 and 8 evaded them on the ‘bingo scorecard!’.

Up 6-3 at five ends, they continued their scoring spree and led at ten ends by 16-5 and 27-9 at 15 ends.  However, Haverfordwest Castle scored in 6 out of the last 7 ends. Rink 3: Andrew Muskett returned to top rink this week – albeit without his regular third Peter Day who was rested due to FA Cup action with his beloved Aston Villa team.  Andrew who as you should know by now supports Wigan, could not emphasis with Peter on their FA Cup win as they were soundly beaten –to the joy of Ben Cloake – to Arsenal 4-0.  Chris Court got his league season off to a win and out it down to playing with a superior skip.  The rink scored a 1,2,3 and 4 but fell short of the Peregrine’s ‘bingo’ tally.  However four counts of four secured a 30-11 victory.  Aaron Lloyd and Dai Rees making up the rink. Rink 4:  Ryan Thomas took over skipping duties from Paul Diment with Joe Richards playing third, Ben Sheldon leading and Cameron White playing second.  After six ends Diment received a call from the Dinosaur Park to get back as quickly as possible with his rink being 1-7 down.  However, credit to the rink as they slowly clawed their way back into contention scoring on alternative ends for the next 6 ends, picking up 11 shots to their opponents 3.  From end thirteen onwards, scoring counts of ones were shared with the exception of  a three count for the Castle ‘triple’.   A final score of 17-16.  However as the opponents were playing with three players, they had to deduct a further 25% and the final official score line being 17-12.

In summary, a good day for the team (Peter Day excluded) and the team are setting a very early pace in the defence of the their league title and the potential of recording a record eight consecutive league title.  At present their closest challenges are the Five Arches Dolphins who poured more misery on Whitland with a 13-1 victory.  Many congratulations to them and let's see if both teams can maintain their form to secure a first ever one, two in the league – Rounded off with a Carruthers win and maybe even a Pulitzer price for yours truly for my newspaper reports.  But let's not get too ahead of ourselves – for the moment at least. 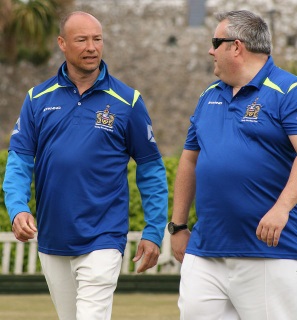 The local derby featuring the top two teams in the Pembrokeshire division one took place at Sutton Street. Tenby being officially the home side played their usual way of parallel to the magnificent club house, erected in 1983 and opened by the then Welsh President, Vic Hubbard and senior Vice President, Tom Osbourne of Tenby and Saundersfoot.

Rink 1:  for the second consecutive day, Diment’s four played on this rink.  With a very good win the day before, expectation were high for the rink comprising of captain Joe Richards, Cameron White and Dion Peregrine, 13 year old son of 4 time silver bowl winner and gold cup winner, Keiran Peregrine.  The Tenby four went about their job very steadily and soon built up a lead at five ends (7-2) against the Five Arches four of Mike Day, President Peter Hooper, James Criddle and Neil Dickinson.  A scoring fiesta of 20 shots in 5 ends saw the lead 27-6 at 13 ends and a further strong finish by the Tenby four saw them home 33-10. Rink 2:  Ryan Thomas moved from the Diment rink to skip in the absence of Craig Guymer.  Teaming up with Chris Court, Steve Sheldon and Gerald Hewitt.  They played against Ken Lloyd, Tom Lewis, Dai Spencer and Ashley Hooper.  Falling behind at five ends (2-7) they never recovered albeit at ten ends they did close the gap (7-10). Fifteen ends (10-15), eighteen ends (13-18) and at the close (15-22).

Rink 3: Andrew Muskett, Peter Day, Aaron Lloyd played against John Rees, John Hubbard, Steve Davies and Ben Simmons.  This was on paper a big challenge for the ‘Arches’ rink, but then again, sport isn't played on paper and Ben Simmons and his rink played well to stem the Muskett surge.  At five ends, Muskett led by two (7-5) and still held a narrow advantage at ten ends (10-9).  The next five ends went to the Simmons rink and they held a two shot advantage (12-14).  Fearing for their undefeated record, the Tenby Rolls Royce rink changed gear and took 14 shots without answer to led 26-14 at the conclusion of end 20.  A dropped single of the last end, but still a great 26-15 win. Rink 4:  John Roberts skipped in place of missing Keiran Peregrine and together with Jon Webb, Shaun Peregrine and Mike Jackson played against the Five Arches rink skipped by the returning legend – Simon Evans.  Simon played with Five Arches captain Ben Cloake, last years Captain, Tony Powling and Roger Thomas.  With Shaun Peregrine In great form and Jon Webb drawing extremely well, the Tenby four took a lead at five ends (6-1).  A four, three, three contributed to a further advantage to the Sharks (16-5) and upon his return Simon and his rink struggled to make any inroads into the Tenby lead, finally going down 29-12.

In conclusion, it is great for the Tenby club to have new players in Dion and Shaun Peregrine making their league debuts, which Dion playing extremely well in the Diment rink.  At 13 years of age, Dion has the world of bowls truly at his feet and with the guidance of his father, himself a very experienced international player, he could go to the very top. Five Arches are very much a team to fear.  Ben Cloake and his selectors have a good blend of youth and experience and the acquisition of Evans is tremendous.  There are players within the Five Arches team who are more than capable of playing in the clubs’s Carruthers team and it is my opinion that if Wales introduced a 6 rink club championship instead of a 4 rink championship, there would only be one winner such is the strength of the Sharks and their close compatriots, the Dolphins.