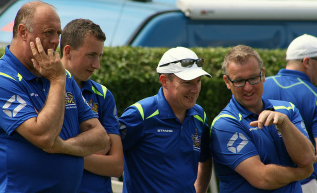 After defeating Bargoed in round one, Tenby played against top Monmouthshire side, Brynmawr, from Monmouthshire.This was always going to be a difficult game against a side of vast experience, featuring many Monmouthshire County players and last seasons British Isles rinks winners and current over 60’s Welsh Pairs winners. Keiran Peregrine and his rink of Luke Rees, Jon Webb and John Roberts started well on rink 1 – and that’s an understatement.  Counts of a three and a seven following up with scoring ends, developed a lead of 17-0 after only 8 ends.  Credit to the Brynmawr four who kept of fighting and dominated the second half of the game.  A final winning margin of 22-16 with Welsh International, Keiran, having an exceptional game. Rink 2, which is the Tenby Gold Cup Final rink, is certainly a happy hunting ground for the English Singles Champion, Lee Williamson.  He knows this rink like the back of his hand, but must have been glad he wasn’t playing in a Gold Cup final against Aaron Lloyd such was I can only describe as the best leading performance I have ever seen over the first 10 ends. I must say that the second half was good but the first half was nothing short of exceptional.  A perfect foil for such a talent has to be the ‘quiet’ Peter Day who is, in my opinion, one of the best players from Pembrokeshire never to have been capped for Wales.  Andrew Muskett was concentration personified.  If any young player wants to learn how to concentrate on his own rink and not start looking at other rinks, then he is certainly the man to watch. 19-3 after ten ends which included counts of a six and five saw the rink in little danger of coming unstuck and a closing score line of 29-13 did not flatter this top rink.

Rink 3.  Paul Diment’s rink took a bit of a hammering to be fair.  Cameron White and Joe struggled all game and they were the first to admit this.  Ryan Thomas was the only player who could come out of the game with any credit and if it wasn’t for this talented player I am not sure what effect would have been on the overall result.  To be fair the Brynmawr rink – last seasons British Isles Rinks Champions – they were tremendous to a man and to say that they won because the Tenby four did not turn up would be an injustice.  Over the season, the Diment rink have been the most consistent and the result did come as a bit of a shock to the system.  Diment playing two very bad bowls on the first end, resulting in a dropped count of 6 shots certainly was a sign of things to come.  This is the first time Diment has dropped a count of six shots since 2001 when he played a friendly against the Golf Club.  At 10 ends, the rink was 4-17 down.  The Tenby rink did pick up things at this stage but once again, despite holding counts of a six and two counts of four shots, the Brynmawr skip made shot in what was quite simply a great performance by the very likeable Monmouthshire man.  Scoring over the last two ends was vital to the team, picking up four shots.  Final score being 15-27. Craig and Luke Guymer could not contain their excitement by ‘drawing’ their favourite rink four.  A count of a five on the sixth end helped in gaining a twelve shot advantage at seven ends (13-1).   The rink which also featured Mike Jackson and International Chris Court, then dropped counts over the next five ends (3, 4, 1, 4 and 1) to go behind by one at the twelfth end (13-14).  However, this rink is made of stern stuff, especially with such a great motivator as Chris Court and they finished strongly by winning seven of the last nine ends.  Final score 23-17. In conclusion, in a similar way to the Bargoed game, this was not convincing although the positives are that the team have won six of out eight rinks.  The team has potential to go all the way like they did in 2009 but they need to make small changes in order to progress any further.

Our thanks to the support we received from the President, Peter Hooper and the Chairman, Fred Broomhead and all the Five Arches players and also Whitland players who took the time to support us. The team would like to thank most sincerely, the ladies who again made a tremendous meal and we, as players, appreciate all the work that they do on behalf of the Club not only on the Carruthers matches but throughout the season. Our thanks also to Ken Lloyd who ‘double cut’ the green – no easy task .  The green played very well and that is down to the work that Ken, Fred and of course Barry have carried out for us. Next up is a team that we are all very familiar with, Saundersfoot, who defeating Blaenrhondda.  This will be a very interesting last sixteen match and I think that this will come down to the wire with no more than a few shots at the close.  Of course our congratulations to Saundersfoot on their win and we look forward to welcoming them to our Sutton Street Headquarters where I am sure, a very tranquil game will be played out.