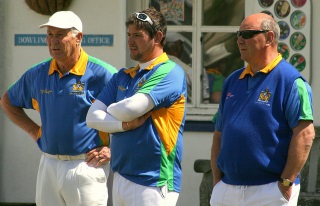 After last week's win at Whitland, the Five Arches were looking for perhaps another shock result against Saundersfoot. However we were brought back to down to Earth with a solid performance from a strong Saundersfoot sixteen. Rink two saw Neil and his rink of Mike, Fred and Harold have a tough afternoon against the Saundersfoot opposition. Every time they got close, the Saundersfoot rink pulled away again and ran out eventual winners by 29 shots to 17. On the next rink, Captain Ben ably assisted by David, Tony and James again had a tough afternoon, with Saundersfoot skip, Steve Poole in imperious form, they only allowed Ben and his men to score on six ends and ran away winners by 29 shots to 10. Rink four saw Dai skipping John, Jonno and Steve. In a tightly fought contest which swung from one side to the other, it looked as though it would go to Saundersfoot until the Five Arches rink picked up six shots on the 20th end to edge into the lead, only for the Saundersfoot rink to grab a shot on the last end to tie the match at 24 shots apiece. Kev and Tom provided a solid platform for the Five Arches to achieve their only rink win of the day, Ken and Ashley chipped in when they could and in a tense finale, in front of the rest of the players, hung on to win by 25 shots to 23. Busy weekend ahead with home games against Haverfordwest (Saturday) and Pembroke Dock (Sunday) to look forward to.